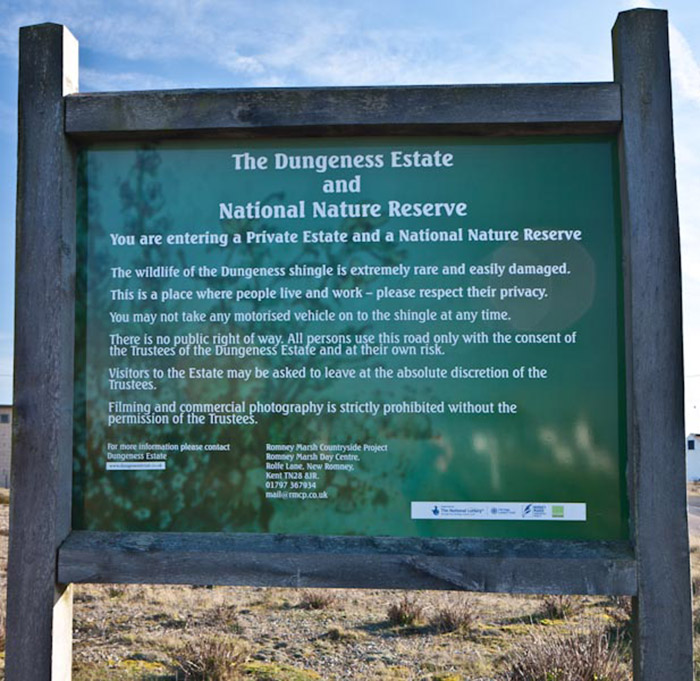 This page will be short on high brow technical stuff about the estate as all this is more than adequately provided for on other sites – see the links page. Hopefully it will provide an insight to the way things have developed over the years, the population who reside here and also, we would like to think, the site will provoke comments from those who are far more knowledgeable than the author, thus in time building up to a first hand, potted anecdotal history. (This then can then be turned into a book and sold for great profit! – a likely scenario).

Anyway back to Dungeness

A promontory on the South Coast of Kent, so sayeth the Encyclopaedia Britannica or the ‘Fifth Continent’ according to another author. 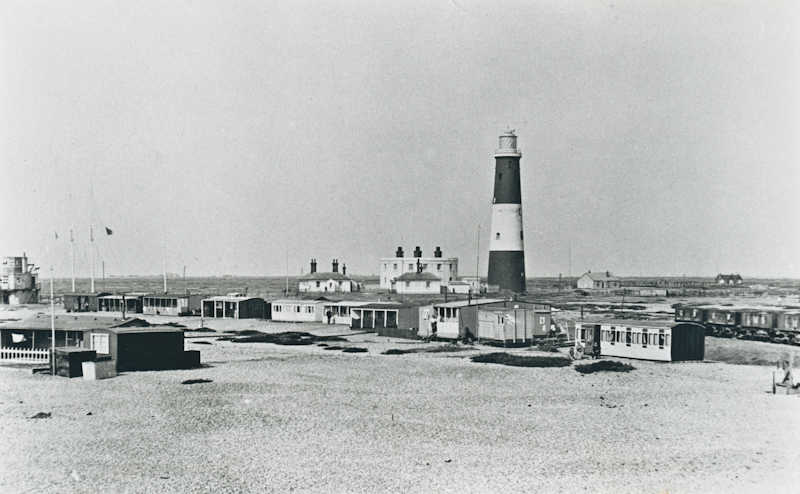 Not around until the 14th Century when the tide went out, Dungeness forms the southern most point of the Romney Marsh.

Sceptics expect the land to be returned to the sea within the next 150 years leaving just the two lighthouses and the 5th and 6th Nuclear Power Stations visible above the waves. But for the time being we have the Romans to thank for the fact that we have not already ‘gone under.’ They created the sea defences, at Dymchurch and the Rhee Wall, which stretches from Appledore to Romney. Since then, with EU help, we have very recently witnessed the completion of the multi-million sea wall at Dymchurch and beyond. 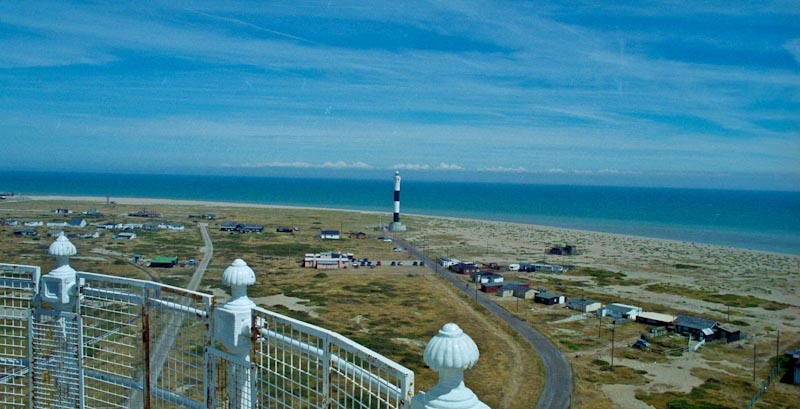 The point of Dungeness sits about 3 miles out into the English Channel, is an area of Special Scientific Interest (SSI – see their site- Links), a bird sanctuary and an area protected from any future development. Thus Dungeness will remain an unspoilt tract of land – except for the rubbish left by inconsiderate visiting leisure fishermen and flotsam and jetsam collected by numerous locals – all in the name of art.

Dungeness Estate was originally owned by the Tufton family but was sold to Southern Railway (subsequently British Rail)   It was then sold to Mr G T Paine and it remained in the hands of the trustees of the Paine Family Trust until it was sold to EDF Energy in January 2017.

Boasting only the aforementioned lighthouses, a lifeboat (see their site – Links) and around 80 assorted shacks within which reside a collection of individualists escaping the torments of the outside ‘civilised’ world.

Had this been written some 30 or 40 years ago reference would have been made to the residents being predominantly local fishing families, (a few of whom remain) and rock crushers. The Tart (originally French and from the Tartes) and Oiller families were two of the first families to reside on the beach from around the turn of the century (20th!). Always fishing families they have, over the generations, formed the backbone of the local life and have played a large part in the manning of the numerous lifeboats that have been located on the beach. The men-folk crewing and the ladies helping with the launching (before the days of tractors!).

PLUTO, no not the cartoon character but an acronym for Pipe Line Under The Ocean was located here and was the hub and source of a series of small bore high pressure hoses that were trailed across the seabed to France carrying the much needed fuel for the D Day landings in Normandy during the Second World War. The pumping equipment was ‘hidden’ in various inconspicuous buildings including one that was, until very recently known as the ‘Pluto B&B house, situated just outside the estate gates (now returned to a private dwelling). The pipeline was an unmitigated success and at its peak could pump one million gallons of fuel a day. A few remaining structures that went to make up the PLUTO operation can still be found to the west of the power stations and along Coast Drive towards Greatstone.

At the ‘north’ end of the estate will be found the ‘Watering House’ which, as the name implies was constructed to house the family who provided fresh water to passing shipping. This house was built in the late 19th century and was joined in 1916 by the purpose built ‘Pennycot’ and followed shortly by, ‘Garden Cottage’ & ‘Sea View’, 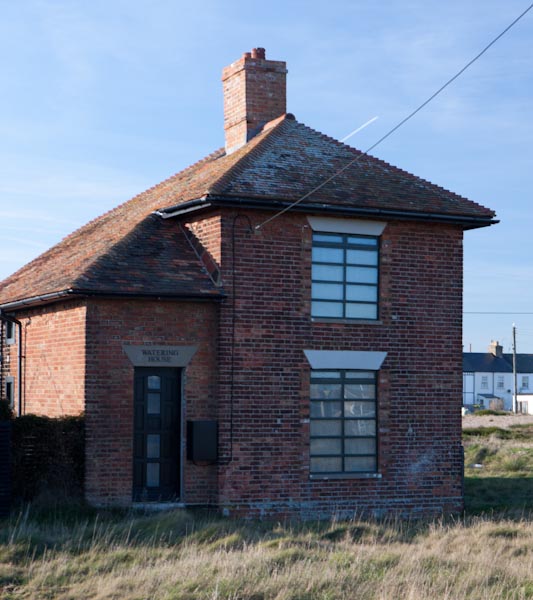 A slideshow should be here

The cost of these holiday ‘chalets’ was about £10.00 – yes TEN pounds (with the more up market ones being £20.00). The cost of owning a shack today above £150,000.00 for a property needing rebuilding to well over £250,000.00 and rising (What recession?). This has resulted in the majority of original ‘locals’ vacating, making way for the more affluent ‘outsiders’ seeking peace and quiet and a pure escape from the rigours of the outside world.

In a way it is sad that so many locals have left as the good old ‘community’ spirit has gone – no more Mayday festivals and the local pubs no more being ‘the local’ However with the advent of the newcomers, with, quite clearly money to spend and less families residing permanently on the estate long needed changes have resulted. No more taking the ‘thunder buckets’ to the seashore at high tide (and getting it back if the wind were coming off the sea). No more hand pumping water up from the beach. No more collecting the milk in jugs from the bowser that delivered once a week oh and of course with the advent of the new fangled electricity out with the Tilly lamps. Yes, as early as 1961, the 18th century had caught up with Dungeness! Mind you we still cannot get broadband or a decent mobile signal. Incidentally there is still one house without electricity – Hopefully an interview with the hermit in residence soon. I digress – the newcomers with money are re-building – this time to government building regulations (and beyond) and producing buildings which will be here for another 150 years – which can’t be a bad thing.

And as an update at August 2019, we do now get a very good broadband thanks to the innovative local company called ‘Vfast’ with their line of site transmissions to their base in Ashford and Canterbury.   Hallelujah!!!!!

The above is what remains of a railway carriage, thought to be one of six rolling stock built in 1885,  for  Queen Victoria’s entourage.  Much of its former glory is  hidden behind tongue and grooved cladding,  but in 2019 the new owners embarked upon a systematic and sympathetic rebuild (internally).   It is sited opposite the Britannia Public House – also known in the past as ‘The Smugglers’. The hither to much mis-quoted  Queen Victoria’s personal carriage is reported to have been delivered to Dungeness in the early 1930’s, in Southern Railway green not the brown and cream livery that would be typical of a Pullman Class carriage – and as seen in the 1950’s. Originally known as ‘Windwhistle’ the name was changed when the lovely exterior was boarded over some 30 years ago.  Although authenticity as to whether Queen Victoria ever travelled within, it certainly was one of several royal coaches used for her visits  around the country – and probably used by her entourage.   Internal fitments did include her emblem on such things as the ‘new’ flushing toilet.   Other artefacts were found within and were sold at auction in the 1970’s

Several of the shacks in this area still retain the original railway carriage (or guards vans) and these are identified by there ‘carriage’ shape. many of the others have retained the original rolling stock albeit within the walls of rebuilt structures.

Filmed in 2005 the Channel 4 programme ‘Up Your Street’ visited two ‘shacks’, both of which have retained their railway carriage/guards vans within. We are currently trying to get Channel 4’s permission to reproduce this program for those interested.

Dungeness is also the ‘end of the line’ for the Romney Hythe & Dymchurch Railway (RH&DR) which claims to be the worlds smallest public railway, having a gauge of just 15 inches.

And apologies and to avoid any confusion the photo below is not the RH&DR local station but the original main line Dungeness stop, after the Luftwaffe visited the area. This photo was taken c1952 and the structure is now nowhere to be seen. It was, however and in keeping with ‘saving the planet’, recycled sensibly – it provided two winters of fuel for the wood burner!

Towering above the small railway station and light refreshment café are the two (for the time being) nuclear power stations (known as ‘A’ and ‘B’) – (see their site- Links for a ‘guided’ tour). These two monstrosities, The ‘A’ station is currently beeing decommissioned and the other white elephant ‘B’ has just (June 2014) been granted an extension to its working life – until at least 2020. Rumours have it they will be joined by a third and then possibly a fourth plant in the not too distant future. ‘Over my dead body’ is the plaintive cry from the local – which, with another little mishap with the reactor, could possibly be a prophecy in the making.

In the meantime its ‘fission’ chips as usual at the Britannia Public House – not forgetting ‘The Pilot’ at the other end of the Estate.

Apart from the unique collection of homo sapiens that reside here Dungeness is also home to a unique variety of wildlife and more than 600 different types of plants – about one third of all plants found throughout the UK. It is also one of the best places in Britain to find rare species of moths, butterflies, bees, beetles and spiders. Many of the insects not to be found anywhere else. And not forgetting the very clear light and the relative peace and quiet.

You may have ended up at this point having read previous ‘posts’ which have chronicled the events of April 16th 1941 when Polish Spitfire pilots Pilot Officers Mierzwa and Waskiewicz of 303 Polish squadron RAF Northolt lost their lives.

The following article has been reprinted in full with the kind permission of and grateful thanks to Rob Green, director of ‘After the Battle’ and of course Andy Saunders for giving the incidents so much deserved publicity. (Andy Saunders is a prolific writer and recognised authority of all things WW2 related and an experienced and respected journalist and television and radio contributor. Find him on Amazon!)

Enjoy your stay and do visit the other sites on our Links page. 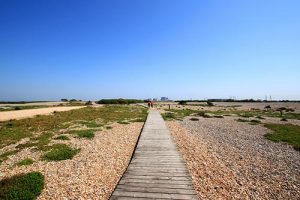